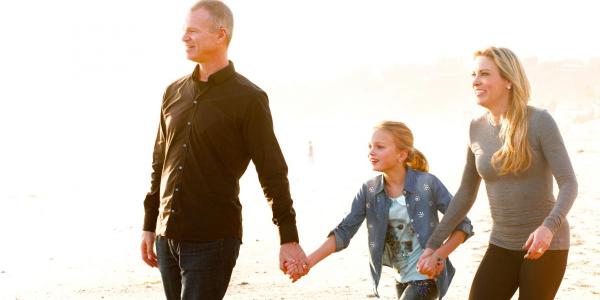 Some people know me as a 3-time Olympian in track and field. And while my athletic journey began in my youth, my personal journey with mental illness began in 2005, a year after my retirement.

I was the proud new mother of a beautiful baby girl, but was dealing with post-partum depression I sought treatment and was prescribed anti-depressants.

Fast forward to March of 2011. My daughter was 6 years old and I had recently stopped taking my anti-depressants (I never much cared for the side effects). Within a few weeks, I was depressed once again and had become suicidal. On top of that, my 20-year marriage to my college sweetheart was deteriorating. Again, I sought help—though it would not be the last time.

I saw a general physician who could tell that I was clearly not well, and was prescribed a new anti-depressant. I wasn’t referred to a psychiatrist, and wasn’t asked about my family history when it came to mental illness (my brother lived with bipolar disorder and later died by suicide when he went off his meds). Within a couple of weeks, I could feel this new drug pull me out of the darkness. In fact, it worked wonders for me and made me feel better than I had ever felt before…or so I thought. I was mostly euphoric and suddenly wanted to live life to the fullest. I had bucket list items to take on, and inhibitions were non-existent.

To hell with my boring, “normal,” mundane life in Wisconsin.

What became clear quite quickly within weeks of taking this new drug was that I suddenly craved sex. I had always been a sexual being, but this was different - way different. It was also clear to me that I was not going to get what I needed in my marriage.

So, over the next 6 months, I started taking lots of trips to Las Vegas and soon started paying for sex. I would have multiple rendezvous with men and women during quick trips to Las Vegas, my newfound playground that stimulated my senses. I would progressively up the ante. Threesomes. Sex in public. And soon, I was secretly having sex for money. Seeking risk, thrill and taboo, and it was never quite enough. I was insatiable. I would run a half marathon in one state in the morning and fly to Vegas that afternoon to live my secret life as an escort that evening. All the while my husband and daughter were back home in Wisconsin. Completely unfazed, I would soon become one of Vegas’ most sought after escorts. I loved the life I had created, the rush--and I felt it could last forever. But after a year, I was discovered, my secret life revealed to the world. My life left in ruins.

My new life was taken from me. I feared my family and friends would abandon me. I truly felt there was nothing wrong with me, but everybody around me was insisting there was, and pleading for me to seek help. I knew I had to comply if I had any chance to keep my daughter. So, I sought help, but not because I felt I needed it, but because I felt I had to do it for others. To get them off my back so I could get back to my glorious life in Vegas.

After trying my best to fool a psychiatrist that I was fine, he diagnosed me with bipolar disorder.

I thought, Are you serious? He indicated that hypersexuality, irrational thinking and bizarre behavior were common traits.

No, I thought. I just like sex, and had finally discovered my passion and purpose in life.

But the truth had been staring me in the face – and while I didn’t know it at the time, my long, painful road to recovery was just beginning.

Luckily, my ending has been a happy one, and I intend to keep it that way. Recovery took a very long time. There were plenty of setbacks. The road to wellness is not a smooth one, and early recovery was the most difficult period I have ever been through. But today, I can reflect, and share lessons learned along the way. And one of them certainly would relate to sex, and how it relates to mental illness. How to identify what is healthy sex, and what is not? What red flags to look for?

Sex and mental illness is a complicated relationship indeed, and apparently, I’m the poster child. Hypersexuality is a very real, relatively common, but misunderstood symptom of bipolar disorder. With hypersexuality, this isn’t just increased sex drive. It’s sex in overdrive - thoughts of sex consume you. Sex becomes priority number one in your life, ahead of what you ordinarily hold dear to you. Rational thinking goes out the window, and thrill/risk is a driving force. You are focused exclusively on the now. Repercussions are the last thing on your mind.

Roughly 50% of those living with bipolar disorder experience hypersexuality as a symptom, yet I’ve found sex is kind of the final frontier when it comes to bipolar disorder. Nobody wants to talk about it, or recognize it. Many mental health professionals struggle with how to address it.

So, how do you know when you’ve gone too far? Here are a few things to consider that may be red flags:

Yet, sex was all consuming for me back then, and utterly impossible to stop given the mental state I was in. I was perfectly willing to lie and deceive to get my brain what it needed. I knew exactly what I was doing. But denial and irrationality is the mindset, and this is an unhealthy brain at work. Your life can be falling apart around you, but you don’t see it, and blame others for attempting to take you out of it.

Relationships are destroyed in the process. Families and marriages are blown up. We may feel a degree of shame after the act, but quickly jump back into the cycle. Anything for the rush.

My diagnosis of bipolar disorder along with meds and therapy would eventually bring a degree of clarity after a very lengthy amount of time.

With clarity came shame, and finally, a realization of the damage I had done. But when you are able to reflect, to feel regret, it’s a clue that you are in the first stages of getting well, and that your behavior was clearly not conducted in your “normal” state.

But here’s the tricky part—I found you cannot move forward, cannot truly recover, until you let that shame go.

Society wants us to feel shame for sexual “misbehavior,” but it only serves as a trigger to bring you right back to why you resorted to the behavior in the first place. It’s a vicious cycle.

This requires education, support and understanding. Because otherwise, we feel embarrassed. We are constantly judged, and feel stigmatized. This is why I speak about sex as it relates to mental illness. To allow others going through something similar feel less alone. To educate and create awareness of a topic rarely discussed. There are so many out there suffering silently. Unsure of why they are doing what they are doing or what they did. There will always be regrets, and you must make your apologies to those you hurt, but it’s the shame that must go.

It’s not easy, but with time and support, it does get better.

Individuals living with bipolar disorder can still have a healthy, vibrant sex life. And remember, hypersexuality is not a symptom for everyone living with bipolar disorder, just some. Management is everything, and there is effective treatment out there. An educated, understanding support team is crucial. Having a person or people around you who can identify when things are perhaps leaning out of control requires honesty, openness, and education as to what to look for. Self-awareness is crucial as well.

We all want to have a healthy sex life. And those living with bipolar disorder certainly can do just that.

If you are interested in having Suzy speak at your organization’s next special event, contact Danielle Kolodkin of Harper Collins Speakers Bureau at Danielle.kolodkin@harpercollins.com.